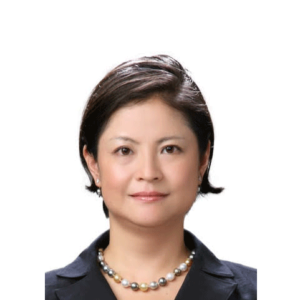 -Founder and CEO of ZENMONDO Co., Ltd. and Special Advisor to Baker & McKenzie

-As a partner at Baker & McKenzie, she led a team of lawyers and other professionals in M&A and other transactions for nearly 30 years.

-She has been described by clients as having “exceptional leadership and management skills” and has led a number of major transactions to a success.

-She has worked in Cairo, Brussels, Taipei, Washington DC, Tokyo, and other locations around the world, using her expertise to advise and solve problems.

– Her long experience and wide range of activities in many countries in the world have set her apart from other lawyers in the field, and she is able to assist both domestic and foreign companies with their global business and growth strategies.

-As one of the pioneering experts on Middle East and Africa business in Japan, she has shared her knowledge and experience on investment and expansion in the region together with Japanese ministries and embassies in Tokyo.

-She also serves as an independent board member of listed companies in Japan.

– In recent years, together with embassies in the Middle East and Africa, she has focused on fostering the next generation of business leaders and creating new businesses through open innovation, aiming to take partnership one step further by investing “together” as well as providing hands-on support to these businesses.

・Embassy of the United Arab Emirates in Tokyo – Strategic Advisor

・Embassy of the Republic of South Africa in Japan – Special Advisor

・Advised MiSK Foundation(chaired by Saudi Arabia’s crown prince) in M&A deals and for its daily management and negotiations.

・Advised the Egyptian government on its national public infrastructure project.

・Advised startups and corporates such as CVCs for investments and business expansions.

・Assisted in multijurisdictional global reorganizations/ restructuring of worldwide operations in more than 20 countries.

・Conducted world-wide multijurisdictional researches, on issues such as employment, sanctions, anti-trust, and other compliance regulations.

・Negotiated and advised on litigations, arbitrations, and dispute resolutions such as termination/ dissolution of joint ventures and distributorship.

・Advised on acquisition of companies with advanced technologies, technology licenses and transfers, and intellectual property issues.