Waseda Business School conducts study tours every year to cultivate a global sense through visits to companies including Japanese companies from all over the world, and to provide new business awareness.  Unfortunately, due to the influence of COVID-19, it was difficult for Waseda to actually conduct a tour to Egypt this year, so we ZENMONDO took the lead to conduct a virtual tour for the Waseda business school students.

Egypt, is where ZENMONDO Representative Mina Arai-Ito has been stained for 3 years in the past, and is a second home to her.  This project was held between November 22~23rd, due to the great efforts of the Egyptian Embassy in Tokyo, including Egyptian Ambassador to Japan His Excellency Ayman Kamel, who is also a ZENMONDO advisor, and the Japanese Chamber of Commerce in Egypt.  We would like to take this opportunity to thank everyone who supported this project and was willing to participate. 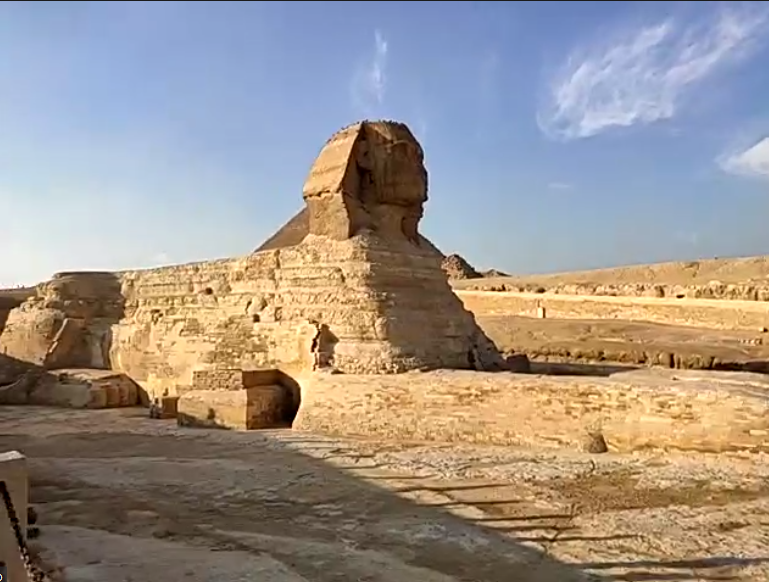 On the first day of the “ZENMONDO Virtual Business Tour” held with Waseda University Business School, the opening began with a greeting and self-introduction from Professor Uchida of Waseda University Business School, and an introduction to the background of the concept of this virtual tour.  Following the opening,  H.E. Mr. Ayman Kamel, who is also a ZENMONDO advisor, introduced the recent policy and economic efforts of the Egyptian government and the relationship between Japan and Egypt, and expressed his expectations for this project.  In addition, H.E. Mr. Ahmed Youssef, Secretary of the Egyptian Tourism Agency, introduced the attraction of Egypt that changes with the times, and how Egypt is famous for the ruins of the Pharaoh era such as the Sphinx and Pyramids, but it is also known for diverse foods and beautiful resort sites such as the red sea and the camping sites in deserts.

Subsequently, Ms. Heba Khairy Metwaly, the project coordinator of the New Grand Egyptian Museum, introduced the details and highlights of each project with valuable photos prior to the opening of the new museum, which Japan provided multifaceted cooperation such as research, analysis, preservation and restoration of many important relics of ancient Egypt, including the treasure of King Tutankhamen, training of related human resources, organizational structure and operational planning support. The new Grand Egyptian Museum is not just a museum, but is a comprehensive entertainment facility with a conference hall, restaurant, 3D theater, learning center for adults and children, etc.  There is no doubt that the opening introduced many of Egypt’s attractions, and the participants immediately wanted to head to Egypt.  At the end of the opening, Mina Arai-Ito, the representative of ZENMONDO, who is also a member of the Japan-Egypt Economic Committee, introduced the activities of ZENMONDO along with appreciation notes to those who made efforts to realize this tour.

Next, we spoke with Mr. Mohamed Abou El Enein, Chairman of the CERAMICA CLEOPATRA GROUP in Egypt.  CERAMICA CLEOPATRA GROUP is one of the largest companies in the Middle East and has been in the Japanese market for 25 years in the ceramic field.  In addition to ceramics, they are also active in the fields of industry, sanitary, smart cars, and media.  He talked about the hardships at the beginning of the launch, global expansion, multi-disciplinary expansion, etc., as well as dispatching overseas for training and focusing on employee education.  In addition, he expressed his gratitude and reminiscences about the difficulty of entering the Japanese market, which tends to demand high quality, and the human resources of Japanese collaborators such as the ambassador at that time.  After that, a promotional video introducing the activities of CLEOPATRA GROUP and the market in Japan and a tour of the ceramic factory of CLEOPATRA GROUP lead by a local Egyptian guide was held.  The sight of actual machines that grinds ceramic raw materials and mixes them with a large amount of water was introduced in a factory that stretches for about 1 square kilometer, and although there were scenes where the video was interrupted on the way, the virtual inspection had a realistic feel.

Next, we received a video message from President Saraya of Saraya Co., Ltd. President Saraie talked about how Saraya started in the sanitary field where hand washing was recommended in Japan at the time when dysentery was common, and now it has expanded to Egypt to revitalize Egyptian agriculture and greening deserts.  Saraya is taking on the challenge of global efforts including other Arab countries, and as a new attempt,  Saraya is also focusing on the development of various products using jojoba oil.  The desire to contribute to the SDGs based on business has been conveyed.

Next, Mr. Omiya of the Global Operations Division explained about Saraya’s overseas expansion.  Starting with the construction of a factory in the United States in 1995, they have built factories in Asian countries such as China and Taiwan, and recently they founded bases in France and other countries.  Since founding a base in Dubai in 2019, they are expanding into the untapped Middle East.

Then, Mr. Omar El Mougy, CEO of Saraya Middle East for Industrial Investment JSC, explained why Egypt was chosen to set up the factory, the development of skin-friendly cosmetics such as the jojoba oil project, hand soap and disinfection.  Various efforts such as liquid production and sweetener development to improve diabetes were introduced.  He explained how they were impressed to see the picture of the desert area that was empty in 1991 turned into a green jojoba forest in 2014 due to the cultivation of jojoba.  During the QA session, questions were asked about the role of the Egyptian factory, cultural differences between Japanese companies and local companies, why they decided to work at Saraya, and differences in market preferences across Africa.

Next, we had a session with two Egyptian startups. Mr. Khaled Sabry, CEO of Modern Machinery, which manufactures agricultural machinery (sells existing products of other companies), and Mr. Abdelhamid Sharara, CEO of Rise Up Company, which provides consulting and accelerators.  Mr. Abdelhamid Sharara explained the agricultural machinery handled by Modern Machinery, and the importance of the expansion plan to Africa based in Chad and the cooperation of Japanese companies. Next, Mr. Khaled Sabry from Rise Up Company explained that they are working on matching startups and resources (especially in the technology field) and bridging Egypt, the Middle East, and Africa.  He talked about the current situation in Egypt, where young people are active, such as the growth of startups and VCs, and the Rise Up pitch event that has been held over the past seven years.  After the explanations were given by both companies, the representatives of both companies answered questions from participants such as differences from other importers/dealers, what they think about Japanese investors, and startup trends.

Due to the influence of COVID-19, Japanese participants also participated from each household.  However, to make the event lively, we have elaborated the idea of delivering Egyptian cuisine prepared by a former ambassador’s residence chef to the students’ homes in advance so that they can enjoy the authentic taste.

In the latter half of the first day, we had a dinner and visited the Egyptian Museum in Cairo and the pyramids seen from camels so that we could enjoy not only company visits but also sightseeing, which is one of the attractions of Egypt.  The tour was accompanied by explanations by two local Egyptian guides who are fluent in Japanese.  Although we couldn’t visit the sights in reality, the virtual sightseeing had a unique feel that cannot be experienced in actual sightseeing.

On the second day of the virtual tour, the main members of the Japan Chamber of Commerce in Egypt, the Economic Group of the Japanese Embassy in Egypt, JETRO, Mitsui & Co., ITOCHU, MUFG Bank, and the local representatives of Nissan Motor Co., Ltd. Economic gathers to discuss the current circumstances and economic growth under COVID-19, changes in customer needs due to COVID-19, local management challenges, how to interact with employees, changes in the local economy since the Arab Spring, the rise of startups, and other topics.

After that, we had an Egyptian guide go to the local market (souq) and did a live market research tour.  It was an opportunity to get a glimpse of the daily lives of the common people in Cairo, such as what kind of products are sold and how they are sold, and what are the prices.

After walking around the city together, we visited a local Egyptian home.  In addition to showing us what their house is like, we also had a tour through the kitchen, including cooking Moroheiya soup, which is one of Egypt’s representative dishes.  Questions such as what kind of home appliances are in ordinary households were asked. Even if you actually visit Egypt, you may not always be able to visit the Egyptian house, making it a magnificent experience for the participants. 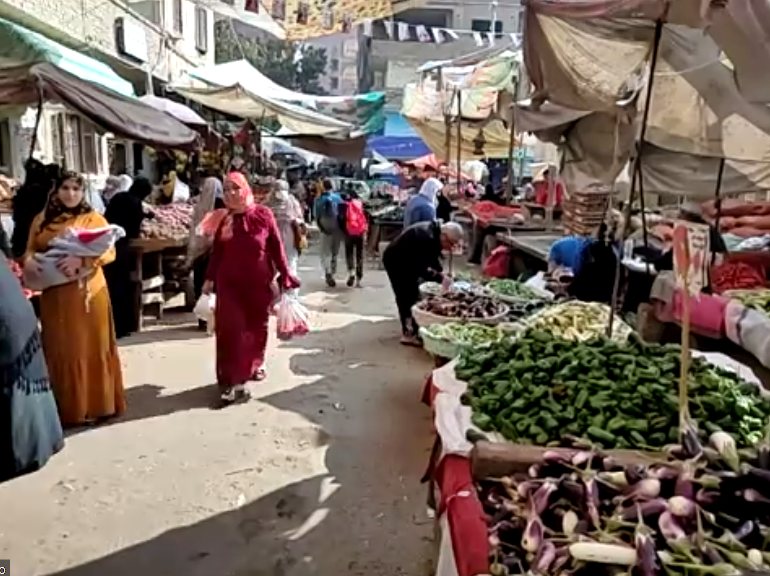 In the latter half of the second day, we made a virtual visit to Nissan Motor Co., Ltd., which has been successful in Egypt for a long time.   After a greeting from Mr. Mike Whitfield, the representative of Nissan Egypt, Mr. Sherief Eldessouky, the plant director, introduced the products manufactured at the local factory.  Next, we interviewed HR Manager Ms. Maisa Galal, Communication Headquarters Mr. Ramy Mohareb, and Overseas Project Director Mr. Kenichi Suzuki about the local operation.  They shared topics such as The situation where women’s employment is increasing (although the ratio is not high compared to other industries), the introduction of solar cells, sustainable efforts such as recycling, and the only positive GDP in the MENA region in 2020 Etc..  After answering questions such as market share and success factors, we also visited the actual factory.  Although there were network problems such as the video not flowing well on the way, we were able to get a close look on the actual production line and the experience was full of realism.

Next, we talked to the Japan Tobacco M&A Strategy Department and the Egyptian national team, who have made inroads locally using M&A methods.  Mr. Ryouhei Sugata, Deputy General Manager of the External Relations Planning Office, explained the outline of the JT Group and the history of expansion through M&A.  Following that, Mr. Anthony Smith, General Manager of JTI Egypt, explained the backgrounds of the decision of acquiring Nakhla in 2013, the water tobacco business (also known as Shisha), the current operation, and the factors of success.  Questions were asked about the relationship with the JT headquarters, efforts to create a customer-centered corporate culture, points to assign the right person to the right place, and differences in strategies in Egypt, and lively discussions were held.

The end of the virtual tour was Khan El Khalili, Egypt’s premier tourist destination.  After seeing the mosque and visiting a traditional coffee shop that is part of the culture, we did a  virtual shopping session. We experienced actual shopping by asking the guide to show us the products we were interested in, asked about the selling price, and negotiated the price with the shopkeeper. The purchased products will be sent to Waseda Business School students later on.  The virtual shopping session was full of enthusiasm, and even though it was conducted virtually, the reality of negotiation gave us a real feeling.

Although it was a new attempt of virtual inspection, it was a trip where you can feel the realism and humanity of the local area.

At Waseda Business School, overseas tours were conducted 2-3 times a year, with destinations such as Southeast Asia, Silicon Valley in the United States, Seattle, India, Turkey, Israel, etc., but we are sure that this virtual tour to Egypt was as (or more) exciting as actual visits to other countries.  Through conversations with the management of local companies and Japanese companies, participants who may become future leaders of Japan felt the importance of understanding different cultures and achieved international perspectives.

At ZENMONDO, we would like to boldly take on new challenges such as business tours in order to continue bridging the world.